Since its founding in 1849, Reichsrat von Buhl has stood for some of the noblest Riesling from the best vineyards of Mittelhaardt. We are more than ever committed to this tradition and see it as a quality promise. Born of the Jordan’schen division that distributed the vineyards of Andreas Jordan to his children Ludwig Andreas, Josephine and Margaret, Reichsrat von Buhl grew by the marriage of Armand Buhl to Juliane Schellhorn Wallbillish, the daughter of a Forster winemaker. After the death of the childless Frieda von Buhl, the winery passed to George Enoch von und zu Guttenberg. From 1989 to 2013 the winery was leased, During the time of the lease it was sold to Achim Niederberger who set up a new team to run his estate in 2013.This is a very brief summary of the long and exciting history of Reichsrat von Buhl.

When you visit us, you will feel the winds of renewal blowing everywhere on the grounds of Buhl, in the buildings and vineyards. Von Buhl remains stylistically Von Buhl, which was important to us from the beginning. Our wine represents the goal of winemaker, Simone Frigerio, reflecting the origin of the grapes and its terroir. As a confident oenologist, he sees it as his responsibility to interpret the soils through our wines in order to support their natural development and expression to strengthen sustainable and respectful viticulture.

Reichsrat von Buhl has been a family-owned winery for more than 150 years, and has belonged to the circle of the most prestigious wineries in Germany for just as long. Since it was founded in 1849, Reichsrat von Buhl has made its wines in a terroir-dominated, timeless style that has never been oriented to fashion, but always to the grapes’ origins in the best soils of Deidesheimer and Forster. Reichsrat von Buhl is certified organic, and is an active ambassador of both natural, sustainable viticulture and of the best German wines. Beginning with vintage 2013, a new team around technical director Mathieu Kauffmann became responsible for the estate. In August 2019 Peter Hüftlein-Seeger and Gregor Hofer acquired management of the winery. Since April 2021, Dennis Geller, the Managing Director, has been responsible for the commercial and sales management of the winery alongside Simone Frigerio, the Cellar Master. They see it as their task, as Managing Director and Winemaker of one of the most traditional and renowned wineries in Germany, to continue improving and developing the traditional values and quality promised by Weingut Reichsrat von Buhl.

The estate was founded back in 1849 by Franz Peter Buhl (1809-1862) and came about as part of the distribution of the original Jordan estate into the three smaller estates Geheimer Rat Dr. von Bassermann-Jordan, Reichsrat von Buhl and Dr. Deinhard. Within few years, von Buhl was recognized for its uncompromising quality.

Felix Mendelssohn Bartholdy wrote to a friend after a visit to Reichsrat von Buhl: “But if you haven’t been to the Buhl estate, you don’t know what Forster Riesling is”. But it wasn’t just on a national scale that von Buhl became famous. Von Buhl wines become some of the most expensive wines in the world and at the official opening of the Suez Canal in 1869, it was VON Buhl Riesling wine in the glasses raised for the toast. German chancellor Otto von Bismarck himself was a great lover of Buhl wines (his famous quote “Dieses Ungeheuer schmeckt mir ungeheuer” this Ungeheuer tastes monstrously good, (Ungeheuer = monster) helped make the Forster Ungeheuer site world-famous). Reichsrat von Buhl has always owned the best plot in the 29 hectar grand cru vineyard Ungeheuer.

The first “Reichsrat” (member in the house of Lords in the kingdom of Bavaria) was Armand von Buhl who was given the honorable title for his achievements in the German social legislation 1883-89. Armand married Juliane Schellhorn-Wallbillich, daughter of a very wealthy family in Forst, and had a son named Franz Eberhard Buhl (1867-1921). It was Franz Eberhard who united the wineries Reichsrat von Buhl and Schellhorn-Wallbillich to one of the biggest privately owned wineries in Germany in 1909. At that time, the total property expanded over 200 hectares of vineyards and forests. Franz Eberhard also changed the name of the winery from von Buhl to Reichsrat von Buhl by including his title. Apart from his achievements at Reichsrat von Buhl, Franz Eberhard was founder and president of the German association of viticulture. After his early death in 1921, his wife Frieda Piper von Buhl ran the estate. She managed not only to maintain but actually increase the high quality that the estate was known for. When she passed away childless in 1952, the winery was inhereted to a political friend of Franz Eberhard, Georg Enoch von und zu Guttenberg.

Over the years, the estate was continuously scaled down due to economic difficulties in its operation, until the entire property was left with only around 52 hectares of land under vine, albeit including the best vineyard sites in Deidesheim and Forst, such as Forster Kirchenstück, Pechstein, Jesuitengarten, Freundstück and the Deidesheim sites Leinhöhle, Herrgottsacker, Kiesleberg and Paradiesgarten. From 1989 to 2013 the winery was leased to Japanese business man Toyohiro Tokuoka. In 2005 the winery was sold by the von Guttenberg family to local business man Achim Niederberger (1957-2013) who knew back then, that he would have to wait eight years before his team could run the estate. 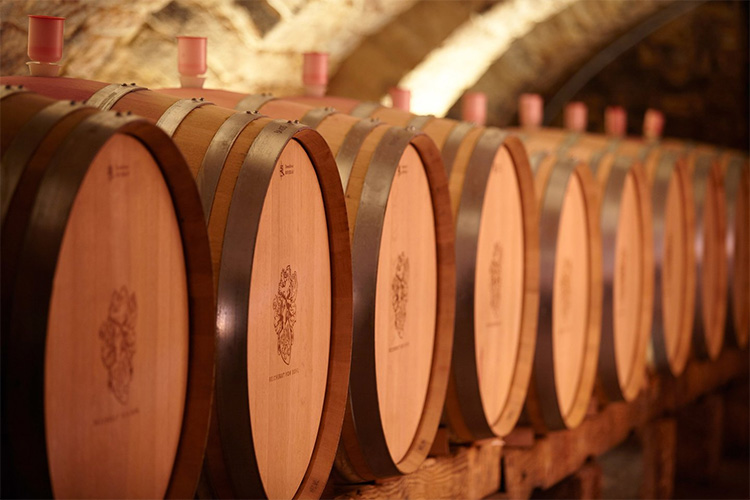